Just look at this "before" photo. Why are we so addicted to lawns? They certainly do not belong in the summer dry climate of California. Being a lover of succulents and cacti, I knew I wanted to install a drought tolerant/waterwise landscape. We also wanted to upgrade the driveway and hardscape to make it more unified and attractive.

The ideas for a makeover started forming in my mind as soon as we viewed the open house and put in an offer on our home in October, 2011. We had obviously bought a "fixer upper" and that was OK with us. Located in Carpinteria, CA., just nine miles south of neighboring Santa Barbara, our home is one mile inland from some of the best beaches in California, and just below the foothills of the Santa Ynez Mountains*.
Step one: Test garden - September, 2012

If I was going to remove my whole lawn and replace it with succulents, it seemed to me that I needed to learn about what grows well in the soil and how plants would respond to the sun exposure. First thing we did was remove a Crab Apple tree from our front yard and plant a succulent pocket garden in its place.
Good news - the test was a great success. Plenty of sun for growing succulents in the front yard. We didn't have irrigation installed and these succulents were thriving. I amended the soil with cactus mix (recommended, as succulents like a well draining soil). I watered them about once a week until the plants were established. After that they were lucky to get water once a month.

Fast forward to July, 2014. Time to start the big FAT makeover. The first thing we did was install a new driveway and front walkway. That was a huge undertaking. The fun part was working with the contractor to create something unique. I acted as project manager and even designed the layout of the hardscape.
Step three: Grass removal. Phase I of the makeover. July, 2014

We went with the fast approach by having the sod cut out which saved a lot of labor time and effort. In hindsight, I would have created more mounded zones to the yard. However, that Agave wasn't going anywhere and it kind of prevented mounding. It turned out OK since our lawn has a natural slope out to the street.


It is really overwhelming when you see the blank slate. Just make sure you know your plants. How big are they going to get? Group similar plants together in 'Hydrozones': plants with similar water needs, and irrigate them accordingly (high, medium, low and very low zones). Add large boulders before you add any plants. The Sydney Peak Granite boulders weighed 300-500 lbs. each. You don't want anything in the way.

I created slight mounds for the pocket gardens on each side of the sidewalk. These plantings really transformed the approach to the front door and acted as a major focal point of the installation. Love how the hardscape turned out. Such an improvement!
The Phase I goal was to get the initial layout in place and install focal plantings and stabilize the soil. It was so compact and dry we could barely dig holes to install the plants. To keep out weeds we went with construction plastic** under the mulch. Based on my research this was not the recommended material, but I didn't want to spend all my time pulling weeds. Drip irrigation was added for the flowering plants (only about 30% of my plants have irrigation) and succulent pocket gardens. I don't irrigate Agaves, cacti or the parkway. The goal was to save water and create a colorful, sculptural landscape.
We had a little rain in the winter of 2014, and the mulch held up OK. Really saw a growth spurt after the rains in January, 2015. Slowly, I added plants here and there around the boulders. By March, the mulch wasn't looking good and needed to go. It was only installed as a temporary measure until Phase II could be completed.
Phase II Makeover - July, 2015

Bye bye mulch...
**Update on the quality of the soil. Turns out using that black plastic under the mulch created a type of "greenhouse effect" and a microclimate for the worms. Now the soil is almost perfect - so easy to dig, and the plants are loving it.

After the plants were installed it was time to add the top dressing - the icing on the cake!
I had so much fun shopping for rocks and gravel. The different colors and textures really complements the sculptural quality of the plants. I think I love rocks as much as I love succulents. Is that possible?

Phase II AFTER Photos - August 8, 2015
I've neglected to mention plant selection. 75% of the plants in my yard are cuttings from plants that were given to me that I nurtured in my nursery until they were big enough to plant in the Phase II installation.

It's been a little over three months and I finally finished off the last of the rock installation. Things have really grown beautifully over the summer, despite record hot temperatures.

I turned off all irrigation over the winter. We have had a few nice rain storms and my plants are flourishing!  My dry riverbed really worked well and held all the water from the rain gutters and kept it from just running off into the street. Video taken January 5, 2016: 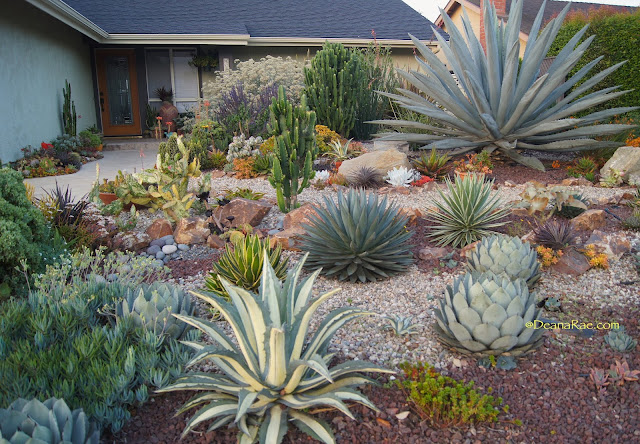 July 2018 - Only three years in ground for most of these plants. Sometimes I can't even believe it myself how amazing it looks. So colorfull and satisfying. Not much to say but look how BIG Fred, the Agave Americana, has grown in just one year!

Thank you for going on this journey with me. Stay tuned for my sequel: My big FAT backyard makeover, coming soon!

Growing succulents is so easy you can go from small plants and cuttings to a lush garden in just a few months. This is five months o... 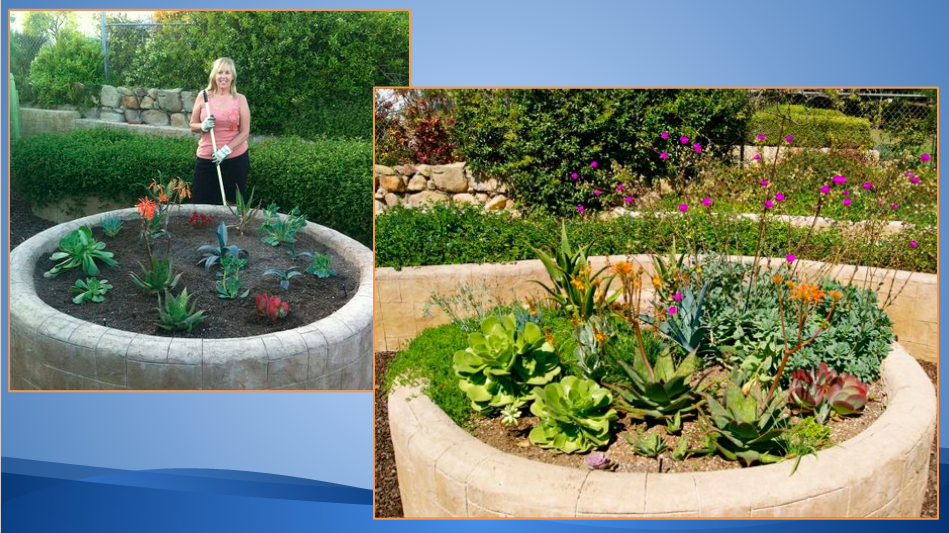